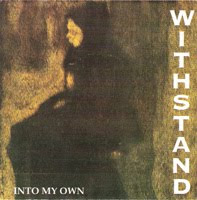 Withstand was a hardcore band from Troy, NY in the '90s who were fucking great. There have been numerous great bands from Upstate NY like One King Down, Stigmata, Section8 and so on... Withstand definitely belongs in that list too. Their mid-tempo mix of hardcore and metal with those typical '90s semi-spoken/semi-sung vocals is just great. I love this stuff. Here are their releases that I own. The 'Into My Own' 7" from 1993 starts off with an acoustic intro but then quickly shifts into their heavy mid-tempo style, with pounding riffs and great vocals. Side B continues with the same style of music but adds some interesting drums to the mix. A great first release for this band... 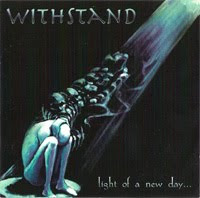 In 1995 the 'Light Of A New Day...' MCD was released on Trainwreck Records, whose next release would be One King Down's 'Absolve' MCD. This 4-song MCD rips from start to finish and includes the sick intro '11' for their track 'Wish You Were' (see also the video below). Bill Scoville (One King Down) played bass on both the 7" as well as this MCD even though they had another bass-player, Justin Markou (who also played in Bloodwar and Pushbutton Warfare), listed both times. Justin Markou died of an overdose in 2006, RIP. 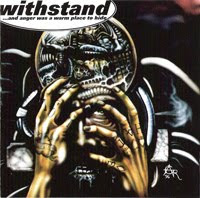 Their '...And Anger Was A Warm Place To Hide' CD was released in 1997 on Fierce/Mayhem Records. All the tracks of the MCD were re-recorded for this album (apart from the intro, insanely enough). A solid album that is a bit more complex in places than their previous work. It contains some great new songs such as 'Eyes To Guide Them' and 'Years End' and but also an acoustic track called 'All Souls'. Great stuff from start to finish. 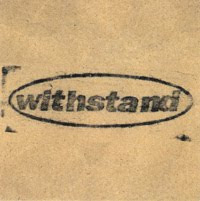 Their self-titled 7" from 1997 is a weird release. It has just 'The Guardian' and 'Fallen On Deaf Ears' from the full-length CD on it, same recordings and all... No clue what the idea was behind this 7" considering there's nothing here that's new or different or anything. That is also why I didn't rip the 7", just check the songs on the full-length. I did include scans of this release with the full-length download. My copy doesn't have an insert tho, not sure there was one to begin with.

If anybody could up some Withstand demo's or material not listed here, that would be awesome. I do have the 'Losing Face Compilation' released by Losing Face Records which has a Withstand track on it, but it's also 'The Guardian' from the full-length. I might post the comp at some point tho, since it's pretty good. They were also on another Update NY hardcore comp called 'United We Stand, Divided We Fall' which I don't have called unfortunately, if anybody could rip it that would be sweet!

As mentioned, bass-player Justin Markou would form Bloodwar (as guitarist) and also did time in Pushbutton Warfare, Withstand drummer Matt Fallon would join them after a while. I have no idea what the other members were up to after Withstand. Any info is appreciated.

Here's a great Withstand video from 1994, just look at the people going off to '11', the intro to 'With You Were' from their MCD, awesome stuff:

Great, thanx, you made my day!
Into my Own and Blind Led Blind are songs I regularly mosh to, and didn't have anything else from them (until now ;))
keep pulling out this kind of stuff :))

Such a great band. I remember when someone turned me onto the full-length years ago and I flipped. I used to have mp3's of one of their demos (with no track titles) on my old work computer, but that stuff's long gone sadly. If I recall the demo was fucking awesome, though. Not that that's any help!

Thanks a lot for posting this because I had no clue about this band and it's truly great.

It reminds me of Section 8 with an heavier sound, great discovering !

Matt (drummer) writing to answer some of your questions... The 2nd 7" was pressed by the Futurist label for the sole purpose of sending it to college radio stations, show venues and the like, just prior to the the release of the full-length. It was never a release of our own doing, so to speak...
We had hundreds for ourselves which we basically tossed to the crowd at shows or sold for a buck if we were broke LOL!
We released 3 demos prior to "Light" which have been converted to CD by several friends. They include "Room To Room", "Into My Own" and our first "hit" "Start Of The Time".
About a year prior to "Anger" we demoed 6 songs from the full-length and recorded it live in the studio. In my opinion it is far heavier than the CD simply because it WAS live! It was very close to our sound and energy when we played out. Personally, I felt the CD was washed out and lacked the punch of the "Light" disc.
My plan is to put this recording to CD, for it is much better. The only people who have it are the members of the band.
We planned a reunion in 2005 with our good friends Section 8, both doing full sets. After the death of Justin, and personal angst towards a member of Section 8, it never materialized. Both bands have steadfastly claimed to never play again. The past is full of incredible memories and we'd like to leave it at that.
All former members (of both bands) are still involved with music to varying degrees. Half of Section 8 is now Gunther Weezul. Kevin from Withstand is in a metal band called The Final Sleep, and I work with Bloodwar to this day when they need the help...

Matt- I would love a copy of the demo cd's. The one that I used to have has long been gone. I've been searching for years for it on mp3(which is how I found this website). I'm still in the Albany area.

Thankx brother! Please take me advice where i can download Krutch albums.

Any chance of a re up on the full length man? thanks.

Dude, thanks for the Withstand and Cutthroat posts and links! Been looking for these for a long time! Just as awesome as they sounded back in the day!!

Can you re-up everything please?

Thank you so much for sharing these old Troy bands

Please, can your reup all of this? Thx

Could you reupload all the stuff?

Reup for the full length?