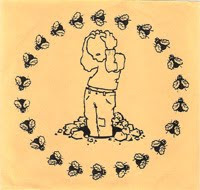 Slowsidedown was a band from Portland, OR in the mid '90s. They released 2 7"s, and appeared on a couple of compilations. Here is their 1st, self-titled, 7" released in 1995 on Red Alert Works, also out of Portland, OR. Maybe it was the label of one of the band-members? Either way, this is excellent semi-spastic mid '90s hardcore/emo with a lot of tension and intensity in the songs. Think Angel Hair, New Day Rising, etc... But I suppose the manila envelope cover this 7" comes in already gives the style away. The really cool artwork of this 7" and the insert was done by a guy called Jason Swivel. Either he, the band or the label was nice enough to include a hand-made postcard as promotion for his graphical design work with this 7", which is a nice touch. Anyways, after this 7", they did a 7" on Excursion Records which I unfortunately do not own. The singer later sang for Jayhawker and Pistols At Dusk. Other members went on to The Transplants.

this sounds awesome too would be great to have it re-upped. thanks for doing all this re-upping haha.