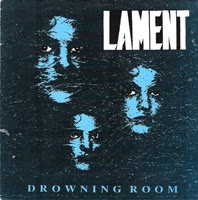 If you're into Maximum Penalty, you might want to check out this 7" if you haven't already. Lament was a shortlived band in the early '90s which had several MP members in its line-up. Lament was even referred to as 'formerly Maximum Penalty' by Inner Journey Records which put out this 7" in 1991, as can be seen in the catalog flyer which came with this 7". Mark Sisto (MP, Breakdown) started the band, and MP guitarist Joseph Affe would join the line-up as well. By the time the 'Drowning Room' 7" was recorded, Mark had left the band already, just as Nick Vignapiano (who also did time in Social Disorder), another MP member at the time, but Joseph was still in the band.

Lament's sound was rooted in that early '90s metallic hardcore way, think of bands such as Enrage, Step Aside, Dismay, Only Living Witness (demo/first 7" era) and such... I'm not a fan of some of the vocals in 'I'll Save You' tho they're fine otherwise, but other than that this is a pretty solid 7". Especially opener 'Interreaction' is a raging song with a killer chorus and hard-as-nails back-up vocals. I have no clue if Lament released anything else, so if anybody has more information, leave a comment or something. They also released a full-length called 'Levitate' on Too Damn Hype (which I actually have, shot memory anybody?!)

Besides the Maximum Penalty connection, bassist Eric Morgan played in Mr.Pickle and First Order before Lament and eventually played bass on a Taylor Dane record! How's that for random trivia (and yes, I only know this because I read it on the Mr.Pickle myspace)... If anybody has any First Order material btw, hit me up! I have no idea what the other members from the 7" line-up did before or after Lament. Any info is welcome.

After Jon Scondotto joined Maximum Penalty they eventually changed the name to Lament and then did this 7". Jon later sang for Tony Stark as well. His brother Mark sang for Shutdown, and his brother Mike played bass in Confusion and currently sings for Inhuman. The band released a full length in the mid-90s on Too Damn Hype entitled "Levitate" which I can upload for you if you're interested.

Thanxxx for the info man, it's well appreciated! And as it turns out, I actually have the Levitate CD, but totally forgot about it until I read your comment, how lame is that, hahaha...

i hope you upload the levitate cd and also the social disorder goin distance cd and media lies ep!!!!

Hey Alex, I'll try to up 'Levitate' soon and I also have those Social Disorder records, so I'll see about ripping those as well at some point.

thanks a lot! i wait in anxiety!!

By any chance do you have Maximum Penalty's "East Side Story" EP?? I seem to have lost my files of those songs. Only one up on mediafire has a password.

Any chance for reup of the 7" and Levitate CD?

ThanXXX, You're the man!