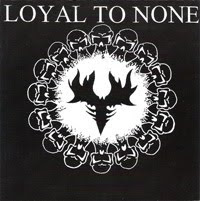 I got this 7" years ago because of the Vision Of Disorder/Loyal To None split 7" I picked up a while before that. While the VOD side on that split got tons more play from me than the LTN side, I did like LTN, but early VOD is hard to beat, you know what I mean?! Anyways, I managed to pick up this self-titled Loyal To None 7" and it's pretty sweet. Loyal To None were from Queens, NYC and this 7" was released on See Records in 1993, so before the split 7", which was released in 1994. It's a pretty good 7" with some solid hardcore with a nice groove to it and atypical vocals. So check it out. I believe Loyal To None also did a live on WUSB split tape with Vision Of Disorder, can anybody confirm this? I have no clue what else they did tho. Singer Brian Meehan moved on to Milhouse, Prom King and Celebrity Murders, no idea what bands the other band members did before or after LTN. Any comments with more info on Loyal To None are more than welcome. Thanxxx & enjoy!

Great solid stuff. With a groove indeed, that reminds me of bands like Neglect and 25 Ta Life.

Found this 7" at my local 2nd hand record store. Great STuff. The Vocals reminds of Bane.