Vision Of Disorder / Loyal To None - 'Split Atom' split 7" 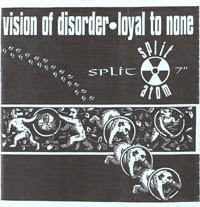 After posting the Loyal To None 7", I got a request to also post their split 7" with Vision Of Disorder. So here it is. This split 7" was released on Hearsay Records in 1994. The only other record I own that was released on Hearsay Records is the Converge/Overcast split 7", which I'm fairly certain was released without either bands consent. So I'm not sure what's up with this split 7" either. Anyways, the Vision Of Disorder tracks on this 7", 'D.T.O.' and 'No Regret', would also appear later on on their 1995 demo (so this 'D.T.O.' is not the version from their '94 demo). Great side with VOD being at the top of their game and it does mean I tend to not listen to the Loyal To None side as much as I should. Which is a shame really cuz their side is great as well, and if you like their self-titled 7" I posted before, you'll love these 2 songs as well. No idea where LTN's recordings are from or anything, or if they're indeed recorded specifically for this split 7". Anyways, this is a solid split, so check it out.