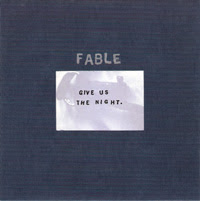 After yesterday's post had a singer/songwriter connection, I figured I'd continue with another singer/songwriter related post. This time it doesn't involve 90s emo tho and the singer/songwriter here is David Vandervelde. His first band was Fable, which he joined in 1997 at the age of 14, I've ripped their 'Give Us The Night' 7" here. Fable was a Christian metalcore band similar to Zao which hailed from Michigan and started out in 1997 with a bunch of young teenagers (14-16 years old) giving it their all. Soon after doing a demo, they recorded their 'Give Us The Night' 7" which was released on Takehold Records in 1998. Some of the songs from this recording session would also end up on a few compilations. The only other record they would do was a split 7" with Mara'akate on Happy Couples Never Last in 2000, when they also called it quits. Drummer Derek W. James now plays in David Vandervelde's backing band. Enjoy.

saw this band a few times...always crazy, always ended up on the floor screaming into their pick-ups/guitars...i never held it against them that they where xtian hardcore......in any case, i lost this "7 (and the split with mara'akate) a long time ago

Thanks for posting this - the Mara'Akate side of that Fable split can be picked up here.

any chance of a re upload? thanks