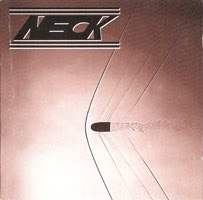 Neck was a band from NYC/Long Island which was formed in 1995. They played a metal/hardcore hybrid somewhat similar to a more straight-forward Candiria, although they didn't really have the jazz & hiphop influences that Candiria did. Either way, Neck had the talent to pull it off, but somehow never really got the recognition they deserved, including by yours truly. I knew Neck from a compilation my old band Disdain was on that also had Neck on it and their tracks didn't do much for me at the time, so I dismissed them. Fast forward to a few years ago where I checked out some more Neck tunes and it totally hit me. This band was awesome. After that moment I managed to get my hands on their first 2 albums which I ripped and uploaded here. 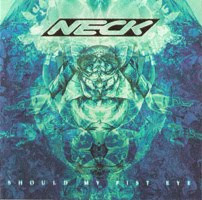 Their self-titled debut album was released in 1998 on Striving For Togetherness Records. In 1999 their second album, 'Should My Fist Eye', was released, this time on Cho'Sin Records. The final track on this album, 'Cinder', was recorded & performed by Drillpress, a band that drummer Larry Hundertmark was in before joining Neck, and they had never managed to release these recordings before. The full discography of Neck includes a 1996 demo, a 7" released in 1997 on Bittersweet Records, a self-released EP called 'Crawl Away' from 1999 and another album called 'Smart Bomb And The Swarm', which was self-released on their own label Lifeless Records in 2005. All of these seem pretty hard to find, so I don't have any of those unfortunately, sorry, but if anybody's willing to part with their copies, hit me up! They also appeared on a bunch of compilations, including the 'Fear No Evil' compilation, on Last Word Records, with among others my own band, Disdain, the 'Over The Edge vol. 3' compilation which I posted here and the 'Disintegrated - A Cure Tribute' compilation on Too Damn Hype. Neck's drummer now goes by the name Razor Tongue as the singer of Nassau Chainsaw, while other members went on to bands such as Car Bomb and Paiste Junkies.

Update: as Mark commented on this post, he has some Neck merch pics. Personally I hadn't seen any Neck merch (possibly because I live in Europe, hah), so my interest was piqued. And for those who are also interested: 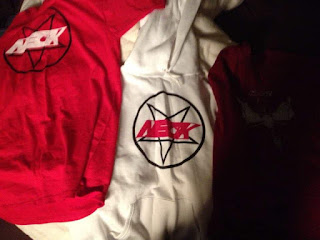 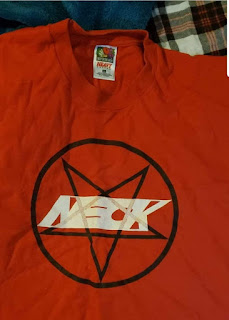 Update June 2020: A guy called Hunter Krueger started a blog on Car Bomb which also includes information, photos and downloads of Neck! Awesome stuff, so do check it out if you want: Secrets Within aka Car Bomb Museum.

Yes! Yes! Yes! Thank you for this post... Been trying to get these cd's again for awhile now. Mine got ruined in a basement flood

I never got into this band, and have tried a couple of times over the years. Maybe if I give it one last shot they'll finally click with me...

hello!! Very interesting discussion glad that I came across such informative post. Keep up the good work friend.

XemonerdX please Re Up the Self Titled Ep and others ^^.

Hey, could you re-up both the albums, please? Can't find these anywhere! Thanks!

Thanks so much, you're the man!

could you re-up the s/t please?

I dont know how to upload pictures, but I have some pictures of their shirt, hoodie. Can hit me at markfranklin112@yahoo.com if you have any interest in seeing them

Mark - I just emailed you... I'm looking for ANYTHING Neck merch related, that goes for anyone reading this. I'll be more than reasonable money-wise. Hit me up!

Check out https://carbombmuseum.blogspot.com/. I also uploaded most of Neck's lyrics to Genius

Awesome man! Great to see those Neck photos! Added a link to your blog in the post above, if you don't mind it...

Yeah that's great! I also tracked down some HQ cover art for Smart Bomb in the Swarm that you might have seen on the Genius page or the Discogs page for that album, as well as a download for the album. I uploaded the tracks to YouTube as they're higher quality than version of the album that was up there