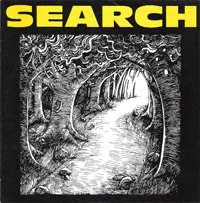 Here's a damn cool 7" from the early '90s Salt Lake City hardcore scene. Released on Flatline Records in 1991, this self-titled 7" is the only release of Search I'm aware of apart from demo's. It has 2 awesome songs on it and an instrumental track that they should have worked on some more to turn it into a real song, it definitely had enough potential for it. It seems the SLC scene at the time was quite happening, other bands such as Brainstorm (whose 7" I will post someday soon), Iceburn and Reality were also great. Ofcourse SLC also produced some amazing bands later on in the '90s such as Lifeless and Triphammer. Anyways, back to this 7". As I said, awesome stuff. I love this kind of hardcore which is so typically '90s, this band reminds me of Trial By Jury, another band I love and who were also around at that time, tho in another part of the US. Definitely an underrated band, so check it out.

Bassplayer Cache Tolman went on to Iceburn, Rival Schools and a bunch more bands. Drummer Andy Patterson is now a record producer and also plays in Iota. No idea what the rest of the members did afterwards. I would love to hear more Search material, so if anybody can hook me up with demo's or whatever, by all means do!

Search broke up not long after this 7" was released. Guitarist Matt Mateus went on to do numerous projects including a solo project that evolved into Hello Amsterdam. I have the music in my collection but it's more post-hardcore/emo stuff. The singer Jim Kimball sang for the SLC band Makeshift before moving to NYC, he has been involved with numerous projects including J-Majesty with some other SLC scenesters.

Awesome, thanxxx for the info man!