Six Centuries In Japan - The Burning And Falling Away demoCD 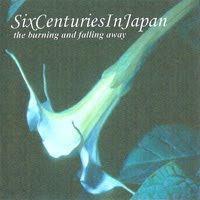 Even tho this demo is not from the '90s, I figured it would be okay to post an awesome demo from the early 2000's... Six Centuries In Japan was a band from Kentucky, they were around from 2002 to 2004 or so. From what I know, this demo was the first of 2 demo's that SCIJ did before they folded. I don't have the 2nd demo unfortunately tho, but I've ripped the 1st one. I loved this band when I first heard em (on mp3.com when it was still a great resource for finding new bands), and contacted 'em about a demo. Their bass-player, Adam Nicholson, sent me this demo and it received a lot of love from me at the time. And I still dig it hard. SCIJ was made up of youngsters, I believe their age-range at the time of this demo was 16 to 18 or so, but they had lotsa potential. This demo is damn good in my opinion, and it still surprises me this band didn't get more attention when they were around. Pretty typical early '00s metalcore, but executed damn well and with some heavy-ass breakdowns, but also some more melodic parts and great leads. The only downside really are the clean vocals which aren't too strong, and I'm not a fan of clean vocals in my metalcore anyways, but the singer's screams are pretty solid. Either way, enjoy!

Six Centuries In Japan - The Burning And Falling Away demoCD
Posted by XhcnoirX at 10:35 PM

I posted that video

I posted that video lol, best band in the area for sure

Link is dead, man. Paul gave me one of these a long time ago, but I lost it. Any chance for a re-upload?

Dude, can you re-upload this ? thank you.

can you reupload this demo? thank you very much