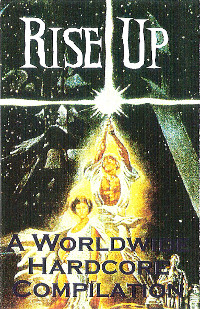 Earlier this week I got an email from a OnexPath reader regarding my post on Withdrawal from Florida, if I had anything else by them. As mentioned in the post, it just so happens they appeared on a compilation that my old band also appeared on, so yeah... Here's that comp, it's called 'Rise Up' and was released by True Strength Records in 1998. I can't remember how we got on that comp or who was behind the label, but I'm fairly certain that the old alt.music.hardcore newsgroup had something to do with it, hah... Those were the days... I don't think True Strength did many releases after this comp, if any.

Anyways, as the subtitle suggests, this is indeed a worldwide hardcore compilation, even if 8 of the 14 bands are from the States.The bands on here are, in order of appearance: Withdrawal (USA), Implicate (USA, I wrote about them here), Advertencia (Puerto Rico), Hoods (USA), Gat Rot (USA), Staydown (Spain), Sludge! (USA), Everybody Gets Hurt (USA), Self (Denmark), Step Down (USA), D.S.M. (New Zealand), Concrete (the Netherlands), Relentless (USA) and Disdain (the Netherlands, my old band, I did the vocals). Stylistically this comp showcases a good mix of hardcore punk, old school hardcore and more heavier and harder styles of hardcore/metalcore. A solid comp from start to finish. Enjoy!

Rise Up compilation tape
Posted by XhcnoirX at 5:02 PM

Can you re-up please?