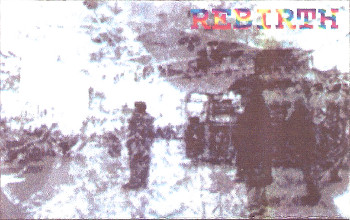 Not to be confused with the current and excellent Melbourne, Australia based band of the same name (do check em out!), Rebirth was an obscure and short-lived band from the Upton/Uxbridge, MA area in the mid 90s. As far as I know they did just one demo, in 1996, which I've uploaded here. It's a good slice of 90s metallic hardcore that mixes a heavier sound with more melodic/punkier parts, with vocals that match this mix of styles, alternating between screams and semi-sung vocals. Me being me, I love the heavier parts more than the melodic parts tho, haha, tracks like 'Nothing To Gain' and 'Seeds Of My Downfall' are simply great.

Unfortunately, I know very little more about the actual band itself, but some members of Rebirth went on to another relatively obscure but solid melodic 90s hardcore band called Uplift. Most/all of the Uplift recordings can be listened to and downloaded on their bandcamp btw, so check that out as well! To add even more of a 90s hardcore flavor to this post, several members from Uplift (not Rebirth tho) moved on to a more well-known 90s MA HC band called Fortydaysrain, as well as Cannae. Rebirth singer Jason is now a film maker who wrote and directed a couple of low-budget horror movies including 2011's 'Blood Was Everywhere', in case yer into indie horror. So there... Enjoy!