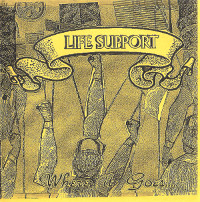 In an early OnexPath post I wrote a bit about Naked Angels, a North-Carolina hardcore band fronted by Rob R Rock, the first sXe hardcore rapper. After Naked Angels ended he didn't quit hardcore altogether tho. In 1997 Rob, together with some friends, recorded a demo under the name Life Support. That demo was put out on vinyl later the following year on Groovecore Records, a local label which had also put out some of the Naked Angels records.

In some ways Life Support was a 'Groovecore NC HC all-star' band, besides Rob R Rock it also had Bryan Scorch from Empire Falls on guitar (before he became an ultra-conservative right-wing nut I presume), L. Grant Meadows on drums (Naked Angels, Shatterhed) and Owen Threatt on bass (Line Drive). All of these bands had released records on Groovecore already, hah... Anyways, the 7" has 4 songs of solid crunchy hardcore with Rob's distinct vocals, some cool gang backups, and lyrics dealing with environmental issues as well as never giving up in trying to make a change. Life Support would record a few more covers for some compilations, but aside from that this is their only release. Check it out!

Here's a video of 'Biosphere' from the demo/7" btw:

Could you re-up this?