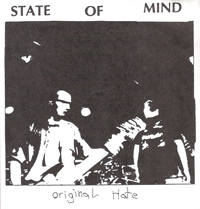 State Of Mind was a hardcore band from the Brunswick, Ohio area, and I have no idea if they did anything else besides this 'Original Hate' 7", heh... Information on this band is scarce, to put it mildly. Decent mid-tempo heavy and somewhat metallic hardcore with those semi-sung/semi-screamed vocals that are so typical of this era. They're far from the best of the bunch, bands like Trial By Jury and Betrayed that I've posted before did it much better. But it's still decent enough to give it a listen if yer into this style. The 7" was recorded and released in 1993, on Smog Veil Records, who also released records from other Ohio bands like The Spudmonsters and Face Value.

If anybody has any additional info on this band, please leave a comment. Thank you!

Thanks, it's quite good, I only knew the dutch State of Mind (great and very underrated band).

Offtopic: is there any chance that you could post a digital rip of your Grin - Part Of Me 7"? It's almost impossible to find anywhere on the internet so I checked Discogs for any familiar names among those who have that record and it turned out that you have it. I found it in a few distros and on eBay, but I don't collect vinyls, and Soulseek didn't find any mp3s.

The Dutch State Of Mind was awesome yes, both live and on record.

I'll put the Grin 7" on my to-post list. My Discogs list is far from complete, so don't hesitate to request stuff here, you never know :)

The fun fact here is that the vocalist is actually Steve Makita, later of Apartment 213 and Lockweld. I believe this was their only release.