By All Means comp 7" 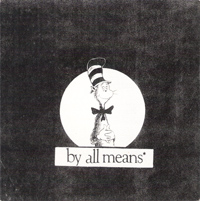 Here's an awesome compilation 7" called 'By All Means'. It was released on Progression Records in 1990. The bands on here are Hardball, Device, Face Value, Relapse and Resolution. Outspoken is listed on the back with a 'cancelled' sign across it. I have no idea why they were dropped from this comp, but whatever reason it was, it happened after the insert had already been designed, there's still a page for Outspoken's track in it. The layout for the cover and the booklet btw was apparently done by none other than Dwid of Integrity. You can see some typical Dwid touches like the Integ skull and Bela Lugosi's face on the back of the sleeve.

Anyways, even without Outspoken, this is one solid slab of vinyl of late 80s/early 90s hardcore. I imagine most of the bands on here are known to OnexPath readers, but just in case... Hardball were a militant sXe band featuring Ryan Downey of Burn It Down & Time In Malta and the vegan sXe rapper known as xEdgex (With The Dreads) who also played in 7 Generations for a while among other bands. Device were from the DC area, members moved on to bands like Elizabeth Herz & Askance. Clevo band Face Value had just started the previous year and would soon become a force to reckon with, singer Tony Erba has been in a ton of bands since, like the H100s and 9 Shocks Terror. Relapse did a couple of pretty cool 7"s before quitting, members moving on to bands like Current, Dearborn S.S. & Ottawa and even doing a label, Council Records. Resolution from the Northwest sorta formed from the ashes of legendary band Brotherhood, members would later play in bands like Sunny Day Real Estate and Engine Kid.