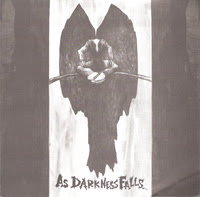 I don't know too much about As Darkness Falls, a NJ death metal/hardcore band from NJ in the 2nd half of the '90s. I got this 7" randomly at a show years ago and loved it. Great death metal/hardcore hybrid with 'evil' growls and vocals. Unfortunately there isn't a lot of info online about this band, nor do I remember seeing any interviews. This 7" was released in 1998 on 9 Volt Records & Bush League Records. They also appeared on an awesome compilation that Bush League Records put out the previous year called 'Definitely Not The Majors'. In 2000, they did a follow-up release, the 'A Tremor So Subtle' MCD on On The Rise Records/Sadistic Records. Another good effort, tho not as awesome as this 7", which I might post in the future. In any case, an underrated band. So check it out.


Apparently there's also a NJHC documentary out there which has As Darkness Falls footage (as well as One4One, For The Love Of and more)... Only seen a trailer of it. If anybody has this docu or knows where to get it, please let me know! I need it.

As Darkness Falls 7"
Posted by XhcnoirX at 4:08 PM

I've been looking for that NJHC documentary for a while too, I think it also features NJ Bloodline and E-Town Concrete, if anyone has any info, please share !!!

can you post "a tremor so subtle" cd, please. I had the cd but can't find it.

thank you SO SO SO much for posting this! Been looking for their stuff for years now. 1990s NJHC was so amazing. Thank you so much!! Alterkation was another highly underrated band too although they had a horrible nu-metal 2nd release I still want to hear..sadly haha.

I was friends with the singer Brian. They were amazing. Some of the guys in the band went on to be in God Forbid. I loved 90's HC. Every weekend there was a show. Amazing. I have some more of there music on disc. I will try to upload.

the doc recently got posted...dunno if you've seen it but here it is

Thanxxx for posting the link to the doc man, that's awesome! Hadn't seen it yet.

I still love this band. I still listen to this seven inch and the CDEP regularly (makes me feel young, I reckon). Is there any chance you could reup this? I don't have the ability to rip any of my vinyl. Either way, thanks for the ADF posts, a very nice blast from the past.

Dan, I re-upped it. And thanxxx for the comment, appreciate it! Enjoy!

Right on, thank you!

please please re-re up up

Hey, thanks for posting this, however it seems I'm really late to the party since the files are no longer available from the file locker. As a south Jersey hardcore kid who grew up around all this, I'd be greatly appreciative if you could get this album re-upped somewhere. I've looked everywhere for it. I was lucky and found a copy of A Tremor So Subtle on eBay, but this LP is seemingly impossible to find. Thanks.

I know this is an old post, but could you please re-up this? Thank you!

You rule! Thank you so much!

Thank you so much!

Heya! Can you please repost this? thank you so much!