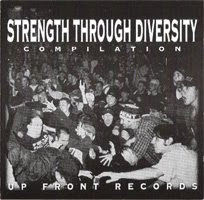 Here's another '90s hardcore/metalcore compilation. 'Strength Through Diversity Compilation' was released on Upfront Records, in 1996 or 1997. Upfront Records was a label run by Darrell Tauro, frontman of Groundzero (currently in Wrench In The Works), who are also featured on this CD. It's got plenty of great '90s bands, some relatively well-known, some not so much. Here's the full list of bands: Drowning Room, Groundzero, Ghidrah, Life Drowning, Follow Through, Silent Mourning, Section 8, Beyond Reason, Tenfold, Inner Dam, Age Of Reason, Tyrant Trooper, Leela, Red Tide, Voice Of Reason, Eventide, Capharnaum, Chokepuppy, Coming Correct, Divided By Hate. Almost 3/4th of the bands were from Connecticut, and the rest from New York (state), New Jersey and Massachussetts. Plenty of greatness to be found here, as well as some mediocre tracks, but overall a good compilation. Check it out, there's bound to be at least 1 or 2 bands on here you've not heard before and will like.

Strength Through Diversity Compilation CD
Posted by XhcnoirX at 9:39 PM

Nice, I already had this comp in mp3 but lacked a few songs due to a corrupted file.

There are a few gems on here, and many good songs !! That's cool that they put a few of the lyrics inside. CT definitely had a lot of good bands in the 90's.

fuck yeah divided by hate had a cool track on the division has begun comp,thx

Can you please reup? Thanks so much!