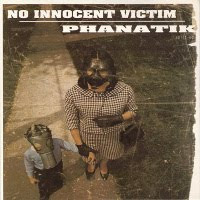 Here's the first release on Facedown Records, a Christian hardcore label, the No Innocent Victim/Phanatik split 7" which was released in 1998. While I'm not Christian myself, and don't believe in a god or whatever, there are some Christian bands that I can totally get into, even if lyrically I go 'meh' or even 'stfu'... No Innocent Victim is one of them, great & ferocious NYHC-styled hardcore. Hailing from Escondido/San Diego, they started out in 1992 and have had numerous releases on a variety of labels... On this split 7" they're featured with 2 live songs recorded at the legendary CBGB's club in NYC in 1997. Regular studio-versions of these songs appear on their 'No Compromise' album, also from 1997. They're teamed up here with Phanatik from New Jersey, a band I know nothing about, who also have 2 songs on here. Not to be confused with the Christian rapper of the same name btw. Good stuff from Phanatik as well, fairly straight-forward old school NJHC/NYHC. Their songs on this 7" also appear on a couple of compilations, I don't know of any other release they've done.

All in all, if you enjoy old school NYHC, there's a good chance you'll enjoy this 7" as well. Just beware: heavy duty Christian lyrics included.

You have no idea how long I've been looking for this. Thank you so much!!!

Hey, could I trouble you to re-upload this one as well?