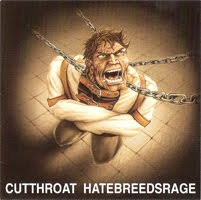 Cutthroat out of Clifton Park, NY. A tight, hard & heavy mix between hardcore and Pantera-like metal. I was lucky enough that this release's label, Ruffneck Records, sent me this CD and Section 8's first CD to review back in the day. Both bands are awesome, and their records are quite hard to come by unfortunately. This album, 'Hatebreedsrage', was released in 1995 and it's hard, really hard. The only other stuff I have by this band are the songs they contributed to the 'East Coast Assault II' compilation, which I ripped and uploaded here. They also appeared on a few more compilations. If tracks such as 'Hate Breeds Rage' or 'This World' don't make you want to punch a hole in the wall, I don't know what will. Apparently Cutthroat did 2 more albums after this one, but I've never seen either of them, and info on this band seems pretty hard to come by online. If anybody has any of their other records, hook me up! Thanxxx to Andrew & Fred for hooking me up!

I think they only did one more album called "The Time That it's Worth". I used to have some extra copies (I got a few from the bassist back when I wrote about their post-Cutthroat band Deadeffect, whose demo is absolutely awesome), but I believe I only have my personal copy left. Both of the CD's are insanely hard to come by, and can even be hard to find mere mention of online. I was lucky enough to find "Hatebreedsrage" on eBay or something many years ago, too. A very underrated band for sure.

Great band, I have The Time That Its Worth album in mp3 too, I'll try to upload it for you if you wish.

I don't have a lot of infos on this band and that's too bad, Troycore rules. Thanks for posting this one !

Dude, here is a link to The Time That It's Worth : http://www.mediafire.com/?p7gy13vfp79brpv

Some dude on a board encoded it for me on a topic on Troycore, too bad there's no scan of the insert though.

If anyone has a decent scan of the cover art for "The Time That It's Worth" CD it would be much appreciated!

I'm a bit of a completist and someone jacked this CD from me (understandably) like 10 years ago. Glad to have it now but the artwork would be killer.

Hello, Wanted to let you know that Cutthroat also had 9 song Tape that came out in 1995 called Swollen Shut. Side 1: Keep Lock,Why Me?,Too Much, Triple Beam Side 2:Wait No Longer, Headstrong,Intro,Call the Shots and Bitter Memories. When i get more time ill upload it for you and a shot of the tape insert.

this thread seriously made me just plug in and play along to the time that it's worth in it's entirety. hell yes, that was fun. miss playing that shit!

good stuff from start to finish! i seen every cutthroat show live other than 2 of the very early ones...

here's the swollen shut demo. sorry I don't have a scan of the artwork. http://rapidshare.com/files/391880260/swollen_shut.rar

I uploaded a bunch of troycore on B9 a while back. I still have the links if you are looking for anything else.

here is the demo tape, Swollen Shut, this is probably the best they've been caught on record. It's nice and raw but not shitty and not over produced. http://rapidshare.com/files/391880260/swollen_shut.rar

OK, just for fun I decided to "touch up" the Swollen Shut demo to restore some of it's original punch. I don't have a copy of the original tape so I was working from the 128Kbps .m4a files that were uploaded by mikexdino. It ain't like a proper remastering but it brings some clarity and crunch back to the songs. Enjoy.

PS - I'd still love to get the cover art for the Swollen Shut demo and The Time That It's Worth CD.

Still looking for that artwork? I have the Time that it's worth cd.

can some please re-up hatebreeds rage? i have the time its worth and the swollen shut demo...mike_nero@yahoo.com

would it be possible to reupload the demo please?

Could someone reupload that Swollen demo?

Hello,the link was deleted, can you re-upload this album again please?

the time that it's worth =>
4shared.com/rar/JBgNJmwm/The_Time_That_Its_Worth.html?

Hello,the link was deleted, can you re-upload this album again please?