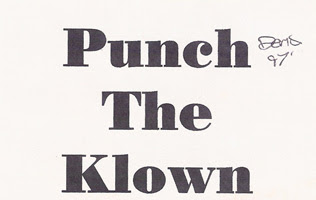 Punch The Klown were a hardcore band from Brockton, MA. One of the members sent me their 1997 demo back in early 1998, and included 2 extra songs on it, one studio-recording, 'Endless', and one live-recording, 'Broken Path', which was recorded at Cafe Savoi on December 30 1997. I don't know a whole lot about 'em. Shawn Rounds played guitar for them, who also did time in the almighty Overcast. According to their myspace, members also did/do time in bands such as Diecast & Colin Of Arabia. Both of the extra songs on this demo are supposedly on the split 7" with Grudgeholder, but I've never seen/heard this one, if somebody can confirm this, leave a comment. Would love to hear that split 7"! Their myspace also features this awesome song called 'Destined For Failure' which isn't on either the demo or the split 7" with Beneath The Remains, which I blogged about a while ago. Is 'Destined For Failure' also on this 7"? If anybody can give me more information on it, or a full discography or something, please leave a comment!

Either way, despite the slightly muffled sound, this is a really solid demo by a relatively obscure and definitely underrated band. They had a great mix going of mid-tempo hardcore with great vocals, ranging from spoken vocals to screams to deep shouts to gang vocals, with plenty of groove. Give it a chance!

Thanks a lot as usual. The sound is very rough, but that's ok because the songs are good.

hey check this maybe it will help you!
http://brosincrime.blogspot.com/search/label/Punch%20The%20Klown

Thanxxx for that link, hadn't come across that comp before. Nice!

I also found this maybe it will help you

Here was our discography...

1998 - Split with Beneath The Remains on BTB records

2004 - Rock Vegas Comp (one song from the never released cd)

Thanxxx for the discography info!

i was 1 of the original members. me,gary,jeff,kirk and dereck formered the band i believe there is 1 more demo before the 97 i recorded with them sometime in 95 or 96 but unfortunately i lost the copies i had over the yrs. trying to get my hands on one if i do i'll gladly share it.

Could you reupload this too please?

Could you reupload please? Great band

I'm currently out of the country, I'll re-up it when I'm back home. Thanxxx!

Great,thanks let me know when you are back