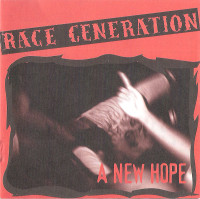 Hardcore is a worldwide thing, even if some scenes get far less attention than others... In the 90s Singapore, aka the Lion City, had a very vibrant and healthy hardcore scene, which was first documented way back in 1993 on the 'Lion City Hardcore: Together At Last' compilation (which I don't have unfortunately, but you can check it out here). Then in 1996 a second LCHC compilation came out called 'Rage Generation: A New Hope', on a new label called Rage Generation (which started out as a fanzine). It features 7 bands that play a wide range of hardcore/punkrock (and admittedly also a wide range in quality): Tools Of Society, Nine One Six, Retribution, Stampede, Jabs, Recover and Revolt. My personal faves on this comp are Tools Of Society and Retribution. I wouldn't say there are any hidden gems on this comp tho, but I do enjoy checking out these local scene compilations which is why I picked this up many years ago. Give it a try!

And in case you thought Lion City hardcore is dead, you're dead wrong. Check out Out For Blood, Losing End and LC93 (made up of oldheads who even played on the aforementioned 1993 comp).