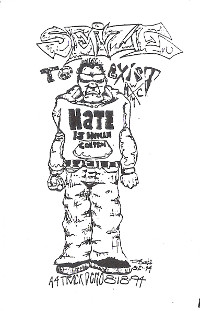 Seize To Hate was a hardcore band from Holyoke, MA that recorded this demo in the summer of 1994. Rough hardcore with raspy, burly vocals that are mixed with some pretty strange vocals from time to time that don't fit the music at all. I can't say this is the best demo I've ever heard, to put it mildly, but hey, I doubt many people outside of Western Mass ever heard of this band, let alone heard this demo, so I'm posting it for obscurity's sake, hah. The band would manage to release a CD later that year or in early 1995 called '94 Hatecore' on a local label called Fear The Dead Records, which I don't have. Fear The Dead operated out of Holyoke, MA as well, so it might have been their own label? I couldn't find any information on what the band members did before/after this band, if anybody has some info, please do share.

Seize To Exist - Hate Is Human Control demo
Posted by XhcnoirX at 4:26 PM

Wow, I barley remember being in hat band. I'm Jeff, played drums for a short bit in this band. If I remember correctly it was myself (Hard Silence, Grimace, Driftwood, Almost Speechless, Huxley, Gein & The Graverobbers, The Deadites, The Skintights and currently with The Pathetics), Eric was vocal, Dez (from Impakt & Moneypenny?) was bass and Audra? was guitar. I can only remember maybe doing a handful of shows. Not sure where they went on from there. You description of the demo from what I remember is pretty accurate. Recorded in my mothers basement.

And if I also remember correctly, It might even say "Q-Bert" on drums???

Thanxxx for the info man! And yeah, the insert has you as 'Jeff Q-bert' on drums, hah...