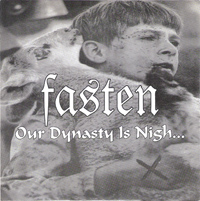 My first post of 2016 and this is by far the worst record I've put on my blog since its inception, sorry about that. But... it was time, it kept popping up every time I flipped through my 7"s, begging for a post. Fasten was a shortlived militant sXe band from Venice, Florida and as far as I know they did nothing else besides maybe a few demo's, and this 7" called 'The Dynasty Is Nigh...' which they released on their own label, Upheld Records. I can't give you a year of release, but I am pretty sure I got this some time in the late 90s, so you do the math. My copy is on red and hand-numbered out of 300, I have no idea if other versions exist, if they do I've never seen them. In any case, good or bad, Fasten is and also was a pretty obscure band, playing heavy 90s chugga chugga metalcore style.

Unfortunately for them they were kinda mediocre at it with some pretty bad vocals. Actually, 'Acquittal' is rather decent really, all things considering. But as I mentioned casually above, this was a militant sXe band. Or should I say a MILITANT STRAIGHT FUCKING EDGE band? I don't think there are many bands that took the line 'The militant edge, it's not a joke' from A Chorus Of Disapproval's 'No Part' as serious as this band. Check out the opening of 'Soaked And Showered':

And yes, they mean xbusinessx, as the song ends with:


Victorious in the name of the X

Man, I doubt my edge is real enough for these straight edge warriors.

All joking aside tho, it sounds like Fasten was a bunch of kids who found the edge and truly believed enough in themselves to release their songs on 7". And that is more than hardcore enough for me. Even if the 7" is not that good.

I love late 90s metalcore as much as the next guy. Grew up with it. Never got into the straight edge lifestyle but i could tolerate the message because i loved the music. But with lyrics like that it really makes these assholes no different than some islamic extremist or a jackass at the Westboro Baptist Church. This really is a terrible message.