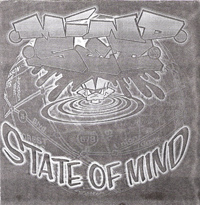 Here's another request, Mindset's 'State Of Mind' 7". Mindset from Queens, NYC started out under the name Downfall sometime in 1996. They quickly changed their name to Mindset, and did a first recording which ended up on a demo and a compilation. That got them on Rick Ta Life's Back Ta Basics Records, leading to the 'State Of Mind' 7" which was released in 1998. Around that time another Mindset was making waves, so another name change was in order. They finally settled on the name Sworn Enemy in 1999, which they have kept since, and they are still going strong! I've seen Sworn Enemy a number of times on their Euro tours and they're always great, definitely check them out if you haven't yet!

Anyways, the Mindset 7" is awesome, if yer familiar with the early Sworn Enemy material, you'll recognize the sound, hard and heavy beatdown-ish metallic hardcore. Some Mindset songs including 'Never' from this 7", would be re-recorded for Sworn Enemy's 'Negative Outlook' MCD. Sworn Enemy would later on add way more metal influences to their sound, this is still straight up hardcore tho. As per usual with BTB's 7"s, the covers & inserts are photocopied, and in this case, my copy doesn't even have a folded sleeve, but the front and back are separate pieces of paper, cut rather crudely into squares. DIY baby! Gotta love it, I know I do. Enjoy!

Cool 7inch, the first Sworn Enemy mcd is still a real rager to this day.

DO you happen to have the Backstabbers album published on Hardway Records ? Been looking for this one for ages, and since you're from Belgium, maybe you have it ?

Great thankx for this!! Can you upload also Inhuman - Evolver and Rebellion albums?

Excuse me for off top can you upload G.F.Y. - Till The Day We Die?!

can u re-up it please? thanks in advance