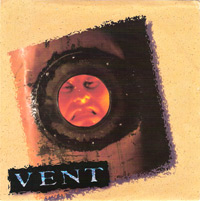 Vent was a hardcore band from Wichita, Kansas, they were around from 1992 to 1996. They're probably best known as the band who ended up as Hydrahead Records first release, Vent's 'Long Lost Human' 7" from 1996, which is still available from their online store here, so I didn't rip it. Before that 7" however, they did another 7", the 'Ephemeral' 7" from 1995, which I ripped here. This 7", which contains 2 songs which came from their demo, was supposed to be released on Mayhem Records, but that fell through and it would eventually come together with No Labels fanzine #3, even tho it still says Mayhem Records on the sleeve. I don't have that zine unfortunately. This 7", even tho it has only 2 songs, is plain awesome, if you're into more mid-tempo hardcore with metallic undertones and with introspective lyrics. After Vent broke up, members moved on to another Hydrahead Records recording artist, Boxer Rebellion, as well as other bands such as Angst Driven and Magnaflux.

Please re upload this