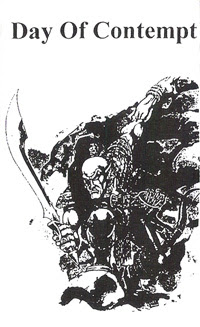 Day Of Contempt was an Australian metal/hardcore band which started out in 1997 in/around Adelaide. Here is a demo by them from 1998. Solid heavy metal/hardcore in the vein of bands like Earth Crisis and Another Victim, with similar vocals. The band had several sXe members, I don't think the band was a full-on sXe band though. After this demo they released the 'Where Shadows Lie' MCD on Voice Of Life Records & Trial And Error Records in 1999 and the 'See Through The Lies' full-length on Good Life Recordings in 2002. Both of these releases continued in the vein of the demo and are pretty good as well. In 2004 the band moved to Los Angeles to try to establish themselves there and become a full-time band. Their sound also changed considerably in a more commercial direction with added clean vocals and such, and they weren't nearly as heavy as before. They turned to shit basically. The end-result was the 'The Will To Live' MCD on Epitaph in 2005. It's pretty bad if you ask me. However this demo, and also their other releases, is great solid and raw hardcore/metal. Enjoy.

Day Of Contempt demo
Posted by XhcnoirX at 5:52 PM

This singer ended up on that LA Ink show for while.

ANY CHANCE OF A REUP?? WOULD BE APPRECIATED! CHEERS..

I don't know, but interested to listen, so cool if you re-up ;)