Divided By Hate - Sediments Of Shame 7" 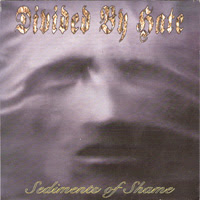 Divided By Hate was an awesome hardcore band from Connecticut. They were formed in 1995 and after a 4 song demo, did the 'Sediments Of Shame' 7". It was released on vinyl and cassette by East Coast Empire Records in 1997. Awesome metallic hardcore that's quite heavy, and great vocals as well. In 1998 the band folded unfortunately. They did not do much else in the form of recordings, they contributed to a few compilations, including the 'Strength Through Diversity' compilation, but that's it. But at least there's this 7", and I still love it. I wasn't able to find much info on this band, but one of the guitarists now plays in a metal band called Creation, singer Dave is a tattoo artist and drummer Jay Gantz is now playing drums with singer/songwriter Kari Bunn. Drum tech on this 7" was Alex Garcia-Rivera btw, who's played in bands such as Piebald, Give Up The Ghost, Baby Gopal etc. Anyways, enjoy!

Divided By Hate - Sediments Of Shame 7"
Posted by XhcnoirX at 9:46 PM

I had only heard the comp tracks prior to this. The 7" as a whole reminds me a lot of Drowning Room.