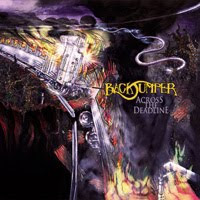 I'd never heard of Backjumper from Bari, Italy before, but they recently made their debut album 'Across The Deadline' available for free and contacted me about it. It was released on Killer Pool Records in 2009. On this album they play metalcore with a bunch of influences ranging from modern hardcore to thrash metal to mathcore to rock and even rap (in the vocals of some of the songs). Overall it works and they have the musical skills to pull it off, tho I could definitely do without the rap-influences in the vocals, they are the weakest part of this band to me. It's not the best album I've ever heard and it lacks a bit of cohesion here and there, but it's solid and I wouldn't mind seeing this band live. Best tracks on this album are opening track 'Deadline', which is a fairly straight-forward track, and closing track 'Stabbed Back And Fallen', which is way more technical. Backjumper released a new album called 'White, Black And The Lies Between' on Southern Brigade Records earlier this year. Check it out if you like this album.