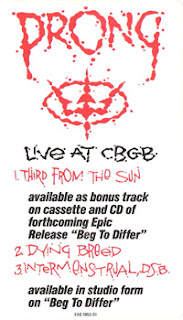 Prong needs to no introduction... Awesome band with an impressive discography. So without further ado, here's a promo 12" that was released by Epic Records in 1990 promoting the then still unreleased 'Beg To Differ' album, also from 1990, which coincidentally is Prong's best album to date in my opinion. The 12" features 3 live-songs on side A, and the B side is etched with the band members' autographs. Opening track 'Third From The Sun' is a Chrome cover, and is the same live recording which also appears on 'Beg To Differ' (not on the LP tho). As far as I know the second track, 'Dying Breed', was never properly recorded for any Prong studio-album, so there's only this live-version. Which is a shame, it's a pretty cool song. The final track, 'Intermenstrual, D.S.B.', appears in a studio-version on 'Beg To Differ'. These 3 live-recordings would, soon after the release of 'Beg To Differ', be re-released on the 'Lost And Found' 12"/MCD, together with the regular version of 'Lost And Found'. Enjoy!

Just for fun and cuz of the Evil Dead video, here's a video of Prong's studio-recording of their cover of 'Third From The Sun':

All links are dead. The first link requires and exe file download and to open it. I never do that with any untrusted exe files.

Could you reup this?
Thanks.

I re-upped it. Downloading an executable should never be necessary.

Reupload please (if possible on mediafire)

Re-upped... Mediafire has given me too much shit in the past, sorry.

Hi, any chance of a reup?

I'm out of the country at the moment, I'll re-up it after the weekend.