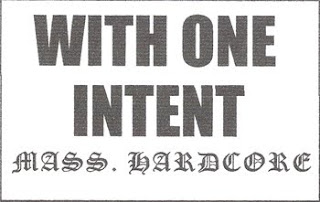 Back in the '90s when I was still active on the alt.music.hardcore newsgroup, one guy who would promote his band on there was Andy Cambria. He played guitar in With One Intent from Massachussetts, and eventually ended up sending me the 'Mass. Hardcore' demo of his band sometime in early 1997 cuz of being on the newsgroup. I enjoyed the demo quite a bit. Raw and tough hardcore, good stuff. 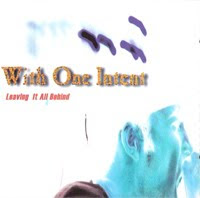 With One Intent were around for about 3 years and did 2 demo's, a mini-CD and a split 7" with Reach The Sky (which was originally going to be a split 7" with Blood For Blood). I included all of these here. They also appeared on several compilations, including a compilation called 'Fear No Evil' (Last Word Records) that my old band Disdain was on as well, but since that track was also on their MCD I didn't include it. Anyways, check it out, With One Intent were a good band that didn't get the recognition they deserved in my opinion.

Here's a biography I found online:

WITH ONE INTENT formed in November of 1996. After only one month of rehearsals, the band went into the studio and recorded their first demo, entitled 'Mass. Hardcore'. This was quickly followed up with a new recording in the Summer of 1997, entitled 'Complete failure'. The 'Complete failure' demo earned the band the recognition they have come to enjoy to date. This demo showed the band as a force to be reckoned with on the hardcore scene and received praise from the US, Europe and Japan. The four songs on the demo showed a progression to a much heavier style. After the release of 'Complete failure', With One Intent began to play more shows in New England and the surrounding States including New York and Pennsylvania. In January of 1998, the band returned to the studio to record 'Leaving it all behind', their debut EP on RPP. This effort contains 6 new recordings and promises to catapult the band to the next level of notoriety in the hardcore community. The band is also featured on a split 7" on Back Ta Basics Records (run by Rick Ta Life) with Boston's REACH THE SKY and compilations on Last Word Records from Syracuse, NY with Faction Zero, Cipher, Neck and others and on Lost Disciple Record's upcoming Boston hardcore compilation.
LineUp (1998) : Seamus Foy : vocals - Andy Cambria : guitas - Rudy Dormitzer : bass - Mark Sarno : drums

saw them on long island once and literally DESTROYED the club...think it was the last time they played long island thanks for sharing!

Could you reup those files please, especially the MCD ?

Possible to reup ? the MCD thank's

Dude, please re up