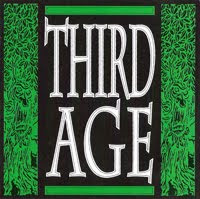 Third Age was a rocking, emotive & metallic hardcore band from Rhode Island in the first half of the '90s. After a demo they released 'The Furthest West' 7" in 1993, a self-titled 7" in 1994 and a full-length called 'Super Natural' which was recorded in 1995 but wasn't released until a couple of years later, around the time they split up, in 1997. I managed to get copies of the 7"s on one of my trips to Amherst, MA. I got em at the Mystery Train record store with a bunch of other records in the 2nd hand section. I also ended up spending way too much money at the Newbury Comics in Amherst on those trips... Oh well. Anyways... I enjoyed the EP's and got the CD version of the 2nd 7" soon thereafter, which compiles both 7"s. I got the CD here in the Netherlands oddly enough, tho I don't think too many people over here know this band really. I ripped the CD but also included scans of the 7"s with the download. I was never really into the instrumental track, 'The Time It Takes', but the other tracks are great emotive & rocking hardcore with a metallic edge and with good sung vocals (in that '90s vein, not the current shitty clean vocals that are so popular), especially 'Natural Law' is awesome. Bands like Standpoint and Cross-Section come to mind. Unfortunately I never managed to get my hands on the full-length, so if anybody has a copy they want to get rid of, lemme know.

I was way late checking this out, but I dig it. I really miss this style of hardcore. It's one of those sounds that's very characteristic of the 90's that sadly hasn't really been carried over by any newer bands.

years later, but i have a copy of the full length i can rip if you want digital files.

Can you please re upload this??