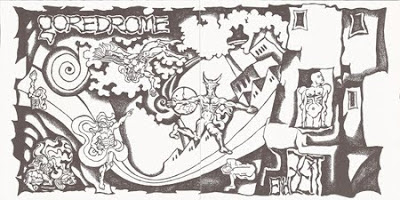 Released in 1994 on Equality Records, this is Goredrome's only proper release as far as I know, apart from a track on a compilation. Goredrome from Germany was a pretty short-lived band unfortunately. I really like this 7" and it's a shame this band sorta sank into obscurity. At times this 7" reminds me of Starkweather, especially 'Wavelength'. Everything about this 7" from 1994, from the artwork to the pics of the bandmembers to the lyrics to music & vocals, is very gloomy and dark, and well done. Don't pass up on this one!

Apart from the 2 songs on this 7", they also did a song, 'Kobe', for a grind/crust compilation called 'Rudi Rat vol.6', which is still available, and can be ordered here. After this band, some members ended up in bands such as Basalt and Kurushimu, both of which are grindcore bands from what I know of them. Either way, enjoy these 2 songs.

ive been looking for this!


if you have the unsilent majority lp or hypocritical society lp up those as well!

hey, if it sounds like overcast im into it, think you could re-up this dude? thanks