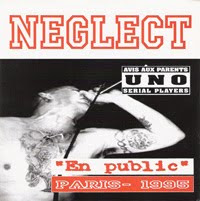 If you're into lyrics that deal with self-loathing, anger, thoughts of suicide, thoughts of killing people, hatred towards humanity, and so on, you should already be familiar with Neglect. Great metallic NYHC with raw shouted vocals, also known as 'hatecore'. The two main persons in the band were singer Brian and guitarist Derek, unfortunately their fights ultimately led to this bands' demise. But Neglect recorded some great records in their 4-year existence. Their 'Don Fury Sessions' CD is still available and combines a couple of recording sessions on one CD. While it isn't as complete as the out-of-print 'Four Years Of Hate' 2xCD (which you can download here), it blows 99% of what's out there out of the water.

This live 7" was recorded on their late 1994/early 1995 European tour, on Friday January 13 1995 to be exact, and was released by Diabolik Records in 1996, in a single pressing of 1000 copies. It isn't included on the abovementioned 'Four Years Of Hate' 2xCD btw. It's a decent recording, altho the sound on 'Deluxe' is insane (especially the drums), not sure what was going on there... Unfortunately there's no insert with this 7" with lyrics or something, to me they were always an integral part of Neglect's appeal. Anyways, it's Neglect, so it's awesome by default. I did scan in the flyers that came with the 7", including the flyer for this show, where Stormcore and Kickback supported Neglect. Quite the line-up, must've been one hell of a show!

The Neglect myspace has plenty of info on Neglect and their current bands and all, so check that out if you want more info. Related to this post, a while ago I posted a demo of one of Derek's later bands, Cleanser. Anyways, Neglect was a one of a kind band, I urge you to check them out if you haven't done so yet. Dig it!

Neglect - En Public 7"
Neglect myspace
Posted by XhcnoirX at 9:24 AM

I have this 7" but it's cool to have a digital version. I bought it a few years ago, too bad it didn't have the flyer inside, collector item for sure !

Too bad there is no insert with it either, plus the line-up is totally out of line : Casimir on guitar ? hahaha wtf !

An older dude I know was at this show, he told me it was great, I think he has it on VHS, I gotta ask him next time I seem him.

And do ask your friend, and digitize the video if you can... We need more Neglect videos!

any chance of helping me find the double cd/discog as a download? i had the 2xcd but lost it awhile back.

Unfortunately, link is dead now. Any chance to reupload this 7"?

I've already asked at 'Stuck in the Past' blog, but got no answer yet. Possibly you can help me. Do you have any zines or scans of the NEGLECT interviews? I'm asking since it's impossible to find them anywhere on the web. Actually, I'm not sure if they've done any, but anyways. Any help may be appreciated.

Yo, I had ZERO idea this record even existed. Can we please, somehow, possibly get a re-up of this? You would make my month!

I'm out of the country at the moment. I can re-up it in a week or so.

can a dude get that reup? -matt

Good looks, and keep up the stellar work with OneXPath!
- Matt / Creation Of Minerals