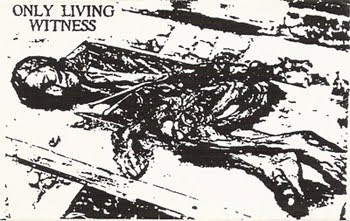 Some time after I posted Only Living Witness' self-titled 7" from 1991 here, I managed to get my hands on their original 1990 demo. Basically, 3 of the 4 songs on this demo ended up on the 7" after being remixed. Here is a rip of the demo, finally. If you want more of my thoughts on this amazing and underrated band, check out my aforementioned blogpost on their self-titled 7". Also note that this demo is not included on the 2xCD discography on Century Media (which is now available in their webstore for less than $5!).

AWESOME thanks for uploading this!

Thanks a lot for this, great work as usual !

thanks man, i got the 7' too, greetings from Defunción Sistemática, my chilean blog.

Any chance for reupload of OLW stuff from the blog? Please and thanXXX