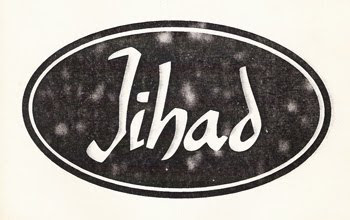 Jihad from Kalamazoo, MI was an abrasive and raw hardcore band with lyrics that are deeply intense, angry and bitter, and a voice to match. Bands like Rorschach, Union Of Uranus and Groundwork all come to mind. They were around from 1993 to 1997 and released a bunch of material. Most of it was eventually compiled on the 'Old Testament' CD, apart from the 'New Testament' 7", some compilation tracks and their 1993 demo, which I've ripped and uploaded here.

Their bass-player, Joel Wick, also ran Makoto Recordings, responsible for releasing some Thoughts Of Ionesco albums among others, which makes the label awesome in my book as TOI were amazing (altho when the label folded a bunch of people with outstanding orders were screwed over apparently). He was also in bands such as Quixote and currently plays in Mesa. Either way, Jihad rocked it and this is where it all started so to say. This is one seriously awesome demo in my opinion. So check it out and enjoy!

spork was great. I was at the first jihad show and they started out as a gravity records sort of band and were a trio with joel singing. They then stopped playing for a month or 2 and when they came back craig lacombe was singing and they clearly really liked the acme 7". haha.

Is it possible to re-upload this Demo and also other Jihad's releases.

can you re up the demo again please?