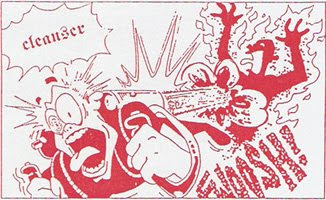 Cleanser was one of many bands that Derek Neglect was in, and to me, one of the more unique ones. I got this demo cuz Derek was in it, and on first listen I was like 'what the hell?!', not what I expected. It's quite different from Neglect with the crazy drumming, all the stuff that's going on and especially the vocal delivery, however it is also quality stuff and I quickly came to absolutely love it. At times it reminds me of Vision Of Disorder, if that makes any sense. Here's a quote from their myspace that is pretty accurate:


They mixed Hardcore/Metal & Melodic parts to create a unique sound. Derek's metallic riffage, Keith's unique drumwork, mixed with the very unique vocals of The one and only Christian McKnight brought a style of metalcore that was new to the scene form 1995-98.

This is one of their demo's, their 2nd one from 1996 I believe. All of these songs would later be re-recorded for various releases. I tried to give the songs the correct name, as the track-listing on the demo-cover does not match the order in which they appear on the tape. As mentioned on their myspace, they have a number of releases, some of which I own and can recommend. I'm still looking for the 2nd full-length 'Monster...With Eyes of a Boy' tho so hook me up if you have it! Also, on the insert of their 'Unclean' 7", it mentions some releases not listed on their myspace, namely split releases with Figurehead and Day In The Life, if anybody has any information on these, please come forth and hook me up! Thanxxx! Either way, give this a chance, you won't be disappointed.

For the record tho, Neglect was and still is untouchable.

hey man I am following your blog for quite a while now and rellay enjoyed almost every post.
I think it`s time to make my first request:
do you have any demos/rarities/bootlegs from connecticuts DEATH THREAT?
or their predecessors DEATH THREAT 89?

thanks in advance
cheers from germany

hey I would love to get both records man!tell me if I can help you with something!wanna exchange blog links?

link was established^^
say do you wanna sell the DT 7"?
or do you know any tracks aaron did as features for other bands?

ok owning them in mp3 is good enough!
thanks for your effort!

thanks man I love you for that been searching or this years now!if I can help you tell me!

Is it possible to get a reupload of this demo please ?

LSS, thanxxx for letting me know. I re-upped it. Enjoy!

Thanks a lot man, it's appreciated. Great music.

I love this band. I came across their "Grime" CD just recently. I used to have "Monster... With Eyes of a Boy" also, but lost it. According to the response I got on the band's Facebook page, the label that put it out folder almost immediately after releasing it, and even the band doesn't have copies. I'd love to get my hands on another copy. It's good shit.

BTW, Neglect did a split 7" with them that came out on Exit Records in 1996. Do you by chance have this split? If you do, please upload it in mp3.

Thanks again! Already looking forward to your rip of the split.

What about NEGLECT interviews? Could you help me with them? I've left my question in the comment section of Neglect - En Public live 7" post.

Thanks for sharing this informative blog over here,
Try Biotique Bio Berberry Hydrating Cleanser this refreshing, non-foaming lotion is use to dissolve makeup and grime.

could you reup please? :)