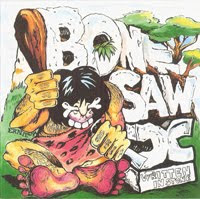 After mentioning Bonesaw on a Point Blank post a while go, here's a long overdue post with pretty much all the records that Bonesaw did (I'm not sure if they did any demo's?). Bonesaw from California was formed by 3 Point Blank members right after Point Blank broke up. They played a similar style of hardcore, Bonesaw built on the Point Blank sound and kept the 'tough', up-tempo hardcore approach with some metallic undertones. Over time the metal influences grew without ever really diving into metalcore territories. I think it's safe to say that if you like the Point Blank 7"s, you will also like Bonesaw. 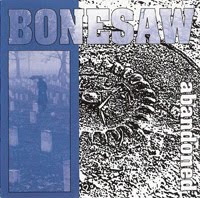 Soon after Bonesaw formed, they released their debut-album 'Written In Stone' on Nemesis Records (which also released both Point Blank 7"s), in 1993. The album features a re-recording of Point Blank's 'Turning Back' (from the 'Hardcore 1990 - East Meets West' compilation 7", also on Nemesis Records). Soon after they were signed by Lost & Found records. Yes, the scumbag, bootlegging label out of Germany actually signed a US band. In 1994 they released the follow-up album, 'Abandoned', which is my personal fave. Two tracks of that album appeared on the L&F compilation 'You Deserve Even Worse', which is where I actually first heard this band. They toured Europe supporting Black Train Jack in 1994 as well, I still have an ugly yellow/brown Bonesaw longsleeve tucked away somewhere from the show I went to. 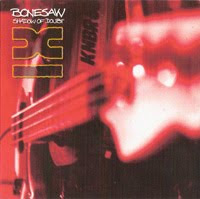 In 1995 their third, and final, album called 'Shadow Of Doubt' was released. Reduced to a 3-man band, on this last album, drummer Shane Valdez also did vocals (which he also did on the European tour), but his voice is pretty similar to former singer Chris Malinowski's, so it didn't mark a radical change in sound. In the mean time, Lost & Found had also re-released the 'Written In Stone' album with alternative artwork (the original cover ended up on the flipside). As far as I know the band broke up shortly after the album was released.

A few years ago Lost & Found Records re-released all 3 albums as a 3-CD package, without additional tracks that I know of. They also released a Bonesaw / No Escape split 7" in 1995 which featured 'Deal With It' from the 'Shadow Of Doubt' CD and No Escape's side has 'No' (Big Boys cover, from their 'Just Accept It' album) and 'Silenced' (from the 'Rebuilding' compilation 7"). My copy is on white, I believe all copies were. Since it's got no new material or alternative recordings by either band, I didn't rip it.

Ha, ha. That is awesome. I almost forgot about that already... Tie flies indeed. But truth be told, after your comment on my blog I went looking on the intertubes for some Bonesaw and actually got lucky (outofprintpunk.blogspot.com and I think somewhere else) So I have been enjoying me some Bonesaw over the last couple of months already.... Still this is a much nicer and more complete presentation! Thanks again, I will get what I am missing for sure.

I remember this band from the L&F compbecause I remember listening to this every fucking day!thx

Exellent blog. Nice collection of great 90s hardcore releases.
My blog have music from the 80s hardcore from all the world, if you like, you can check it here:

Thanks for the music. Up the good work and stay hardcore!

That is awesome news! Looking forward to hearing the new material! Are you guys gonna keep us updated through the myspace?

Yes, we'll keep the myspace updated with our progress. Hopefully, we'll be able to get some rough demos of a new song or two up for you to hear in a month or two.
Cheers!

Could you possibly reup these, please? Thx!