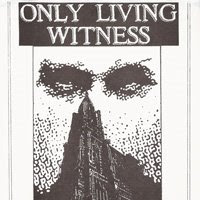 If you've studied the thanks-lists of Boston hardcore bands from the '90s, you will have seen this band and/or its frontman, Jonah Jenkins, mentioned more than once. Alongside bands like Sam Black Church and Tree, they had their roots firmly planted in the hardcore scene, but weren't afraid to branch out and incorporate influences from metal and such. There's a small biography on their myspace with former bands and current bands etcetera, see link below, so I won't repeat it all. This 7" from 1991 was this band's first 'proper' release, on a tiny label called Look Again Records. So tiny even, that the only reference to Look Again Records on my copy of the 7" is the number in the matrix, which says 'LA 001'. Then again, my copy doesn't have an insert, so who knows...

Talking about the matrix... The matrix on side A reads 'slug - escape is unfilling' and 'but it warms the willing' on side B, which is a line from their song 'Slug' which can be found on both their 'Prone Mortal Form' demo and album of the same name. Their finest hour, to me, came with the release of said 'Prone Mortal Form' album. It is an incredible album which I cannot recommend enough. It creates a unique mix of hardcore and metal and Jonah's vocals are great. Their second album, 'Innocents', didn't do too much for me, but it is still miles ahead of most of what was released at the time. I seem to be alone in my opinion tho as pretty much everybody else who's into this band seems to prefer 'Innocents'. Oh well, what can ya do?!

I've seen this band a bunch of times on their 2 European tours, the first with the Cro-Mags in '93 and the second time with Leeway a couple of years later. I can think of worse bands to tour with! And neither time they disappointed. They played a one-off European reunion show in my hometown last year but it was way too expensive for me (€45 pre-sale, which is just under $60 as I am typing this), also since I didn't care too much about the other bands. Oh well...

If you like what you're hearing, either here or on their myspace, do yourself a favor and get their records! Century Media released a double CD with their albums, the 'Prone Mortal Form' demo, their 2nd 7" called 'Freaklaw' and some unreleased tracks, which you can get here for dirt cheap. Or if you prefer vinyl, Dutch label Reflections Records re-released both albums as a beautiful limited gatefold doube-LP, which you can get here.

A great, rare 7" from an absolutely stellar band. The song "Dying System" was actually a song by the thrash band Formicide (the band that pre-dated OLW). totally love these guys...

Great blog, too! Psyched to see your future posts. I'm gonna link you up right now...

I think I'm with you on Prone Mortal Form. Amazing album. That opening riff alone.. damn.

Wish I had seen them on those Cro Mags / Leeway tours (damn!), but I'm glad I got the chance to see them in Eindhoven. Wasn't into any of the other bands, but Only Living Witness killed it. The fact I had press tickets didn't hurt either haha. Sorry :)

Great guys too. Jonah was as nice in person as when he answered the questions to my interview for Asice.net / Some Will Never Know #1.