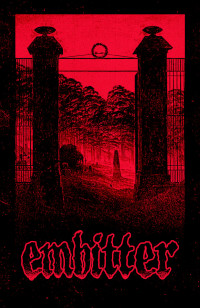 A year ago I did a post on Polish band Embitter, reviewing their 'Season Of Solitude' 7". They recently contacted me again to review their current release, the 'Orwellian 2018' tape which was released on Youth 2 Youth Records late last year. Compared to the 7", the new songs sound more focused and intense. The band has tightened their sound, there's more of a sense of urgency to it. The guitars are way heavier on these songs, losing the crunch from the 7", but it also makes their sound fuller and more in-your-face. Thankfully the production is open enough that things don't end up muddy or muffled, the leads still come through clear enough to add some variety and spice to their sound. The heavier, more metallic edge to their sound does seem like a natural evolution for the band, it will be cool to hear how they continue from here on.

If the title of the tape does not give it away yet, some of the lyrics on these songs are inspired by the book '1984' by George Orwell, linking 2018 to 1984. 'Orwellian' even starts with the motto of the nation of Oceania from that book:

War is Peace
Freedom is Slavery
Ignorance is Strength


And well... '1984' is still relevant, more so than ever, it does feel at times that ignorance and sheep-mentality are the new cool. It's cool to see a band not just mentioning a literary influence but also incorporating ideas from the book into their lyrics. Embitter is definitely a band where the lyrics are an important part of what the band stands for, and that is always a good thing.

Where I had some reservations regarding the vocals on the 7", which were a bit thin, those are no longer warranted. The vocals are strong and powerful on this tape. They also make the Morning Again cover on this tape, 'Dictation Of Beauty', stand out as his voice is quite different from Kevin Byers'. It's an excellent cover btw, and a great choice, as Morning Again was of course also a band where the lyrics were an integral and important part of what made them so special.

Overall, 'Orwellian 2018' is a great release, it's just a shame there are only 2 new songs here. I need more!