No Exit No Return comp 7" 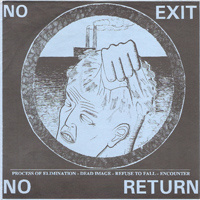 Here's the first release on Upstate Records, a Syracuse, NY based label run by one of the guys in Oversight. This 'No Exit No Return' compilation 7" was released in 1991 and has 4 bands on it, Process Of Elimination, Dead Image, Refuse To Fall and Encounter, playing mostly late 80s/early 90s melodic hardcore. Of the four bands on here, Process Of Elimination from CT have the most straight-forward sound, similar to their self-released 7". Dead Image is the least memorable band on here, I'm not into their take on melodic hardcore. Refuse To Fall's track has that early 90s sound that they also showed on their 'Soul Fire' 7", good stuff! Encounter's song is a typical Encounter song and really good, but it sounds almost like a rehearsal recording unfortunately. Damn shame, I love Encounter, but I have the give the edge to Refuse To Fall as best band on this comp. In any case, a decent comp, so check it out! Oh, and that weird start to Encounter's track is the way it starts on my 7", maybe it's a mastering error?

Out of interest do you happen to know what the second USR release was? This being the first and Framework being the third, I can't find any info other than that.

I think it was the Oversight demo.