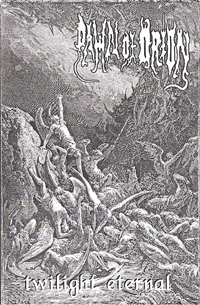 Dawn Of Orion was a short-lived metalcore band from Georgia, they were around from 1997 till 1999/2000 or so. Their sound was far more metal than hardcore, similar to Day Of Suffering and Arkangel. They were also heavily anti-religious in imagery and lyrical content. Here's their 'Twilight Eternal' demo from 1997, I believe it's the only demo they did. I can't remember how I got hold of the demo, I might have gotten it from Erik, their guitar player. I sent the band an interview (by snailmail of course) for a zine I planned on doing (which never happened), probably after hearing their 7". He wrote me a letter with answers etc, which I've probably lost many years ago, and I imagine this demo. No idea how else I could've gotten it. Anyways, this is an awesome demo, very metal, very 'evil' and very good.

Besides this demo from 1997 they released the 'On Broken Wings' 7" on Undecided Records in 1998 and the 'For The Lust Of Prophecies Undone' CD on Immigrant Sun Records in 1999, both also awesome and well worth seeking out. The CD has re-recordings of a couple of demo-tracks btw. Band members would move on to more full-on death metal bands like Signs Of Dying & Vastion.

very metal, very 'evil' and very good.
I was very fan back in the days !! Thanks Emonerd and glad to see you still active !!!

any chance you could re-upload this?
thanks!

one of the band members has segments of metal reviews up on youtube he held up a copy of one of Dawn Of Orion's seven inches and spoke about how he played for them,as well.