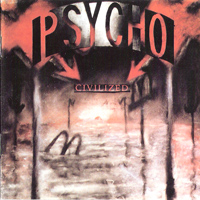 The 90s gave us a ton of awesome compilations, some of which I've posted in the past, and I will continue to do so. Next in line: 'Psycho Civilized', which was released by Elevator Music in 1995 and contains a great selection of bands from across the States, altho the focus is on the CT scene. Elevator Music was from New Haven, CT where they were also involved with the Tune Inn club, hosting hardcore shows on a regular basis. They released stuff by hardcore bands like Dissolve, who are also on this comp, and Cleanser, but also punk and ska bands.

In true 90s fashion this comp starts with a spoken words track, in this case by Greg Bennick of Trial. After that the comp has 18 bands on it: Cornerstone, Trial, Vision Of Disorder, Brace, Dissolve, Blood Runs Black, Dismay, Stigmata, Tyrant Trooper, S.F.A., Killing Time, Asphalt, Botch, Jasta 14, Eventide, Shiv, Tapeworm and 25 Ta Life. Most bands should not be unknown to regular readers of OnexPath. Shiv feels a bit out of place with their noisey cover of Gang Of Four's 'Natural's Not In It' (called 'Gangüforé' on here), and Tyrant Trooper is straight up death metal, but the rest of the bands fall anywhere between indie/hardcore (Eventide) to old school (Cornerstone) to NYHC (Killing Time, 25 Ta Life) to more metallic hardcore (most other bands) etc... All in all, a solid comp that's great for playing in the car while driving to/from a show.

If anybody has any info on Brace from CT, please leave a comment. I love their track, but I can't find any info on them. I would love to hear from by them.

I'm pretty sure that BRACE had an EP.

I had a friend who dated one of the guys in BRACE. Ive been trying to track down their album for yeeeears. Saw them at the Tune Inn in New Haven CT in my mid to late teens.

https://m.facebook.com/russell.pierpont
This i belive is/was the singer

I was the bassist for BRACE, glad to see people interested. We never had another commercial release, but put out our own cassette EP, which I don't even have a copy of! This post just inspired me to buy the last copy of Psycho Civilized on Amazon. We disbanded maybe in 94? 95? and a few members reformed as Kid Suspicious. We put out another DIY cassette EP with that group and went our separate ways. My first show with the band was with Jasta 14 in New Haven, we did a lot of gigs with Candiria, Overcast, 25 Ta Life, Hatebreed. I was 14-15 years old at the time playing with cats much older than I was, and it was a great experience. I learned to play, record, make flyers, silk screen patches, did everything ourselves. Tune Inn was my favorite venue. Bristol Skate Park was fun too.

I'm still making music, though completely different stylistically, more on the Hip Hop/Soul/Jazz side. Soul Inscribed is my current band.

I'll see if anyone has some of that other music to digitize...