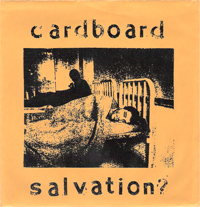 Here's another typical 90s hardcore compilation 7"... Let's see: it's packaged in a screenprinted manilla envelope, it features a mish-mash of bands playing hardcore styles ranging from emocore to grindcore, it's a benefit comp (in this case for the Memphis, TN shelters for homeless people), it's got cut & paste xeroxed inserts... Need I go on? And yes, that makes it awesome! Cardboard Salvation? was released in 1997 by Shandle Records and Genesis Twelve Records. I don't know anything about Genesis Twelve, but Shandle put out a bunch of releases in the 2nd half of the 90s. The guy behind Shandle Records also played guitar in a band called Chalkline, who also contribute a track here. Chalkline was a pretty decent emocore band, but unfortunately their track here, while decent, is pretty weak compared to their other material. The other bands on this comp are Self Infliction, Deathreat, Inept, FMD (F.M. Destruction) and Burned Up Bled Dry. Self Infliction play 90s emotive & metallic hardcore but with some weird vocals thrown in, and are the best band on here together with the rough grind/hardcore of Burned Up Bled Dry. All in all another great 90s hardcore comp.

Sick record! Do you have the Realization 7" comp on Subjugation records? Would love to see it uploaded!

Hi, the file for this comp expired ... when you have a chance, could you please re-post it?