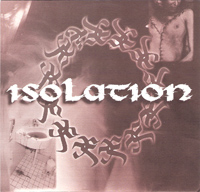 Isolation was a new school metallic sxe hardcore band from Milwaukee, WI in the second half of the 90s. As far as I know they recorded only 1 demo, in 1996, and this 7", from 1997. It's an awesome 7", with great typical late 90s metallic hardcore with hoarse, almost blown-out sounding vocals. Their run as a band was cut short when their singer, Paul Gazo, died on October 1st 1997. He was into tagging all around Milwaukee under the moniker 'SEB', which stood for Straight Edge Bomber (as in tagger). One night when he was tagging an old abandoned building, he fell through a hole in the roof, and died from the injuries he sustained. The band disbanded after that, and the 7" which had already been recorded, was released posthumously. After the band folded, the remaining members would move on to other bands such as Up In Arms and Protestant.

For the record, both the Isolation demo and this 7" can be found on the amazing mkepunk.com site (here and here). But I decided to rip & scan my own copy of the 7" anyways, as this band/7" doesn't get mentioned nearly as often as it deserves.