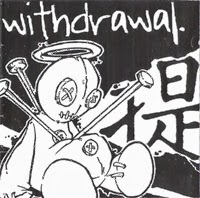 Here's another record I picked up at a distro at a show back in the day because the cover somehow hit a chord with me. And it turned out to be a great, and fairly unique, record. Withdrawal was a metallic hardcore band out of DeLand, Florida which started in 1994. In late 1997 they self-released the 'Our Piece' CD. Excellent hardcore that is very a-typical and is yet another example of the large amount of great bands coming out of Florida in the 90s. I know very little about the band, they didn't seem to get the recognition or attention they deserved unfortunately. I know they did at least one demo, as well as a 7" called 'The Same Rhythm' (the title track also appeared on a compilation tape called 'Rise Up!' that my old band Disdain was also on), but I've never been able to track down a copy of either of them. If anybody has either of them, or other Withdrawal material, please leave a comment. Especially if you're looking to get rid of it, haha... Anyways, enjoy!

Withdrawal - Our Piece CD
Posted by XhcnoirX at 3:44 PM

I don't think I had ever heard of this band before, but I'm diggin' it. Thanks for posting!

could you re-up this album please?

I have copies of this if anyone is interested. Played guitar.