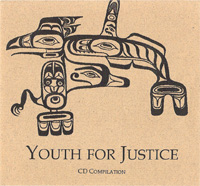 My Faultline post from a month ago received a comment about a compilation Faultline were on. As it turns out, it's the Youth For Justice compilation mentioned in my post. So I ripped it and here it is. This compilation was put out in, I think, 1996 by Earth House, a label (or maybe a collective?) ran by John Faultline, singer of Faultline and Mark Lucy. The compilation features a number of bands, as well as almost a dozen spoken words tracks by among others John Faultline and Mark Lucy. The spoken words tracks deal with a variety of subjects such as objectification, feminism/women's rights, racism, the injustice of the political system etc, but truth be told, they're all too short in length to really delve into their respective subjects. The bands on here are Faultline (with 2 tracks from their 'Roots Of The Rape Culture' album), Council Of Five Nations, In Vain, Faceless, Ego Filter, Emberscent, Quadiliacha (the only band on here I cannot get into) and Element 33. Overall, it's a pretty cool & interesting compilation with a huge variety in styles, ranging from 90s 'new school' hardcore to emo to punkrock. Beside Faultline, In Vain and Element 33 are the standout bands for me. Enjoy.

Youth For Justice compilation CD
Posted by XhcnoirX at 5:20 PM

ah damn, got here late. dead link.
would love to hear the in vain and council tracks again.

Mjop, I re-upped it now. Enjoy!

Would love to hear this again. Thank you for going to all the trouble of posting it. Sadly I got here too late and the link is dead. First heard it when it came out, then traded the CD in the mail for a zine, back in the days when people still did such things.

why do these things keep going down? Is this the only place you can find this In Vain song?