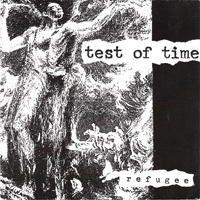 Not to be confused with the current Boston straight edge hardcore band of the same name, here's the sole 7" by an early '90s Connecticut hardcore band called Test Of Time. Recorded in 1991 and released in 1992 on Inner Rage Records out of France, this is their only release besides demo's. Inner Rage Records btw was the label run by Jean-Marc, the original singer of Drowning. I believe the band quit soon after this 7" was released? Which is a shame, this is great hardcore with a lot of groove and melody and some sweet bass-parts. Unfortunately my 7" is missing the insert, so I have no idea what the lyrics are about, and I also have no idea who was in this band and what they did before or after Test Of Time. So if anybody has any information, please share! Anyways, enjoy this underrated band!

hey man is it possible to re up that cold front demo?or even upload their st mcd their 2000 demo?I am sure its all oop and maybe they have more stuff?

as alwaqys great blog!thanks for all the effort!

Hey man, I re-upped the Cold Front demo. I don't have their other stuff unfortunately, sorry!

hello bro. i also have this 7", thing is..it also doesn't have an insert. haha! also, wanna read the lyrics and band info.

could you reupload that "The Nightmare Remains... In This Other Land" comp you posted on XSTIPX ? much appreciated.

thanks you so much again!

Ed, if you're looking for stuffs from France, old zines, comps or release no problem! Thanks for this one..! Inner Rage, Hardside and Hardway was the best!

is it possible to get a re upload of this? Thanks