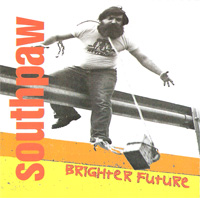 Southpaw were an underrated hardcore band from Long Island. They were formed in '95/'96 and recorded the 'Brighter Future' full-length in 1998, which was released on New Found Hope Records. Good up-tempo '80s NYHC inspired hardcore with shouted, somewhat high-pitched vocals which can take some getting used to (I like 'em). After the full-length the band released a live-recording on a Brazilian label which I've never seen or heard (if anybody can hook me up that would be awesome!) and the band also appeared on some compilations during its existence. In 2000 the band folded.

However, that's not where their story ends. In 2007 the band got back together and in 2008, 10 years after 'Brighter Future' was released, the band released their second album 'Stand For Something' on Motherbox Records. I haven't heard that album, nor do I know who's left of the old line-up. Anybody have this album?

Any chance of re-uploading? Much appreciated!

Any chance of the link being fixed been lookin for this one for a long time, thanks in advance.

Dude, any chance of re-uploading? Thanks!

thank you dude. greets from sarajevo/bih