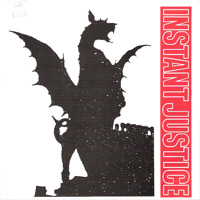 A while ago I posted the Brickhouse 7", which was the 2nd release on NJ's Street Level Records, a label which would eventually become Watermark Records. This is the 1st release on Street Level Records, the Instant Justice 7", which was recorded in 1989 but released in 1990. Instant Justice was a band from PA and this 7" is the only thing I'm aware of that they released apart from demo's. It's a weird mix between almost youth crew like hardcore, mid-tempo heavy and metallic hardcore and some straight-up (bad) metal solo's. It reminds me of Edgewise's 'Silent Rage' record overall, tho this is not nearly as good as that. Definitely not the best 7" I've ever posted on OnexPath, but hey, they can't all be classics. This is a piece of PAHC history anyways and I can enjoy it for what it is. Singer Jesse also did a zine called Homeslice (which I've never seen, but I've also never been a zine-geek), no idea what the members did music-wise before or after Instant Justice.

Where in PA was this band from?

North Wales, PA according to the insert that came with the 7". Which I re-upped, just in case, heh.