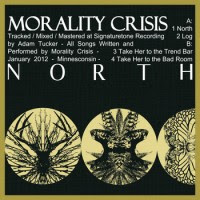 Morality Crisis from Minnesota/Wisconsin was a band I had never heard of till recently. One of its members, Christ, contacted me about his band, and label Minnesconsin Records (Minnesota, Wisconsin, get it?). Morality Crisis just released a new 4-song EP called 'North'. And it is pretty damn good! Morality Crisis mixes various styles into a great blend, ranging from post-rock to sludge to metal to hardcore. Good stuff, great riffs, with a heavy & full sound all around. And the vocals are awesome as well, nice range in styles, without sounding forced at any point. As I said, I had never heard of this band before, but they've been around since 2003, released an EP in 2005, broke up in 2006, and are now back together. Their new EP is streaming at their bandcamp, where it can also be bought as a digital download. Their old EP can be downloaded for free from there as well, it is also quite good. Physical copies of the new EP should be available sometime soon as well. Definitely give this band a listen.
Posted by XhcnoirX at 10:59 AM