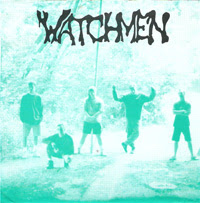 Buffalo, NY has had its fair share of great hardcore bands. Zero Tolerance, Snapcase, Despair, Against All Hope, This World Rejected, etc... Here is a lesser known band from the late 80s/early 90s Buffalo scene called Watchmen. If that name sounds familiar, Watchmen member Doug White also ran, and to this day still does, a recording studio called Watchmen Studios, where many hardcore bands have recorded. Here's the Watchmen's self-titled 7" (also referred to as 'Disease Of Isolation' 7"), which was released on Rorschach Records in 1990. It was ofcourse recorded at Watchmen Studios. I don't know if Rorschach Records was their own label or a friends or something (as it was located in Lockport, NY), but the comic book reference seems too much of a coincidence, Rorschach being one of the Watchmen and all. Anyways, 4 tracks which bridge hardcore and hard rock/metal, with pretty rough vocals. Pretty hard stuff, especially for the time, altho Zero Tolerance had an even harder sound when it comes to Buffalo hardcore from that era. Good stuff tho, I can definitely appreciate this band. It kinda reminds of bands such as Brickhouse. Enjoy! Their drummer would also do time in Snapcase, no idea what the other members did before or after.

hey man could you please re up this?
thank you
.A.x.